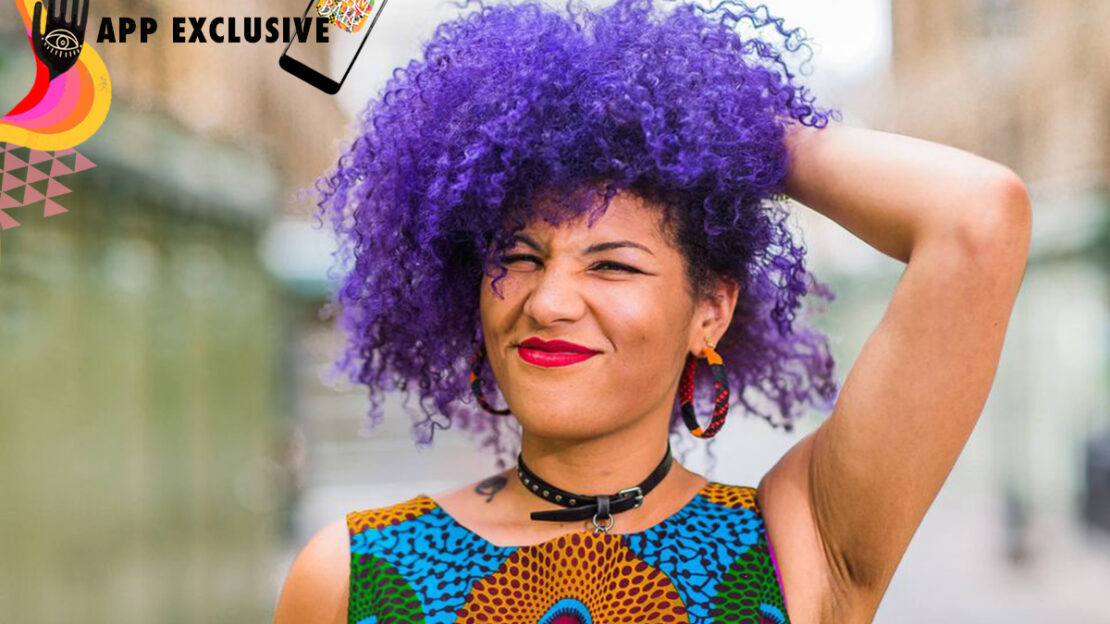 bristol-based musician, dj and writer ngaio anyia has supplied us with a blistering mix as an app exclusive. an odyssey of sound, NGAIO GIVES US A BREAK DOWN OF WHAT HER SELECTION means to her AND THE CONVERSATION SHE HOPES IT WILL INSPIRE.

You can wrap your ears around the mix exclusively on our Shambala App – which you can find free of cost and free of data-mining – via your App Store or Google Play.

When music from Black artists starts telling some cold hard truths about the injustices and inequalities they and their community face, their music is automatically put into the ‘activist’ pile. Some are put into that space happily, others don’t want to be politicised – and don’t feel they should be when simply writing about what they know. We’re living in a time of change, where I hope Black History will not only be celebrated one month a year but weaved into the history we learn every day. I hope we’re moving towards a time when conversations about race evolve into more nuanced discussions around identity, culture, power dynamics, and intersectionality so we’re able to create a world where everyone is seen for who they are as supposed to what’s projected onto them.

We Need Representing : An Ode to Black Women

Representation, when I was growing up, was minimal – you didn’t see many beautiful, strong, powerful Black women on the screen so the ones you did see really stayed with you.

Ibeyi open and close this mix – an Afro-French Cuban musical duo consisting of twin sisters Lisa-Kaindé Diaz and Naomi Diaz. They sing in English, French, Spanish and Yoruba – a Nigerian language spoken by their ancestors before being taken to Cuba as slaves in the 1700s. In Yoruba, Ibeyi (Ìbejì) means “twins”.

On my Nigerian side I am Igbo & Yoruba, Ibeyi were the first fusion artists I heard singing in Yoruba on the scale to which they reach. Their music incorporates elements of Yoruba, French and Afro-Cuban, and fuses jazz with beats, samples with traditional instruments – the epitome of the beauty of multiculturalism and how it feeds into and inspires music today.

Missy Elliott was the original feminist for me. I remember listening to her 2nd album, Da Real World in primary school with ‘She’s A Bitch’ on repeat. She was so clearly playing to her own rules in a male-dominated space and earning respect from everyone simply from being the best. She was one of the first to collaborate with Eminem before he was famous and has been working with Timbaland since the beginning. Missy is a trailblazer and still to this day outshines with her unadulterated creativity and genius collaborations.

Growing up I was a huge fan of the Noisettes and remember thinking Shingai was one of the most beautiful women in the world. I was also a huge fan of One Tree Hill which was of the time and very white in its casting. Seeing Shingai in an episode, a dark skinned woman outshining everyone with her beauty, talent, and energy, filled my heart with joy. And for this remake of the banger ‘Hey Hey’ to be reimagined by the one and only KG…this one had to go in. KG recently remixed ‘Objectify’ from my last EP and has been taking up space in the production world for a hot minute.

There was no way ‘WAP’ wasn’t getting a prime spot. For some this song is crude and the video pornographic – it caused such an uproar that petitions were started to get it banned. I think it is absolutely excellent. The only difference between ‘WAP’ and male-led rap videos is that Megan Thee Stallion and Cardi B are doing it for themselves. They are not the dancers or the eye candy – they are the whole damn meal and bwoy, does the ownership of their sexuality annoy people…

Seeing Sampa The Great at Rough Trade in November last year was one of my highlights of the whole year. When she asked all the black girls in the audience to make themselves known for Black Girl Magic and told us all to shout “I am beautiful” before she performed it to us, with us, that’s when the tears came. Not through sadness but because it is rare to feel so seen in that environment – check out my full breakdown on how amazing that gig was, here.

Solange’s ‘Don’t Touch My Hair’ doesn’t need much explanation but it had to be put in. I have a colourful afro and the reflexes I’ve had to hone to block wandering hands is a disappointing joke. People say to me in shock all the time – do people really do that? – the answer is yes, yes they do. Even in these Covid times I had to block a reach on Gloucester Road at 8 in the evening. It is relentless, it is boring and it must be called out, be everyone. Afro hair is not for petting, we are not dogs.

Over the past 2 weeks, #EndSars has been all over social media. Nigerians are protesting against SARS – a plain-clothed Special Anti-Robbery Squad which was assembled to tackle armed robbery. On Tuesday 20th army officers were sent to one of the bridges the protestors had peacefully occupied (Lekki) and open fire. Since then the protestors have been forced back into their homes for safety. It is unlawful and brutal and was all captured on Instagram live. However, there are still ways we can help.

For more information on this subject, please listen to my End SARS podcast, released tomorrow, with one of the volunteers who was providing aid to the Lekki Gate protesters in the days before the massacre. She gives us a breakdown on what SARS has been doing, what the protestors are fighting for and how people can help.

As if a pandemic alone wasn’t enough to deal with in 2020, we were also subjected to yet more stories and footage of our Black American cousins being killed through police brutality. I think most can agree this wave was more intense than the last, with nowhere to escape what felt like never-ending footage, images, and stories detailing yet more unlawful deaths. It was painful, it still is – but it also provided the push needed to reignite a cause that is nothing if not humanitarian. Black lives matter isn’t only about Black people, it is about all people being allowed to live safely and equally amongst one another. Black Lives Matter is a statement that never needs to be followed by the word ‘but’.

I first discovered Mykki Blanco in 2016 and was blown away by their music first of all, but also their artistry across the board. Rapper, performance artist, poet – they are a multidisciplinary talking about real issues in all their tracks. Black transgender people are the most in need of protection. They are an intersection too often left behind in the fight for equality. Excellent UK based Black trans artists to follow are Travis Alabanza and Munroe Bergdorf.

Black Britain – As A Black Person in the UK

I started writing Blackbird 5 years ago just before the first round on Black Lives Matter began in the UK. It was written out of frustration of continually playing the role of ‘ask a Black person’ whilst the Black politics affecting the community were ignored. It was written out of annoyance that conversations around race were either rooted in ‘white’ or ‘black’ with no room for nuance or conversation around culture or identity which is beyond necessary for Black British and mixed/dual heritage British. It was also written as an ode to the voices of Black women – so often sought out for explanation, leadership, and understanding whilst simultaneously ignored.

The music video for ‘Blackbird’ comes out this Sunday – November 1st – on my YouTube channel and on Instagram. Follow and subscribe to continue on this journey with me. I hope you’ve enjoyed this as much as I have!

listen to the mix via the shambala app and select ‘sounds of shambala’ from the dropdown menu.