Authored by Matt T-hanu of XR.

An Introduction to the Rebellion

Extinction Rebellion (XR) was officially revealed to the world with our Declaration of Rebellion on 31/10/18 at Parliament Square, London. Speakers included the Guardian columnist George Monbiot (illegally occupying the road with us) and the teenage climate activist Greta Thunberg, who had ridden from Sweden in an electric car with her dad. When Greta proclaimed, ‘It’s time to rebel’, I started crying.

You may already be aware that XR – now an international movement in over 35 countries – is a radical activist movement. Using peaceful non-violent direct action (NVDA) and mass civil disobedience to force governments to act appropriately, in response to the sixth mass extinction event on Earth.

You may be asking, ‘Why is XR happening now? Why not before?’ or ‘Why the urgency?’ You will possibly (hopefully!) be aware of the gradual destruction of the Earth’s resources and biodiversity wreaked by humanity over the past couple of centuries. What you are probably not aware of (because the mainstream media and politicians won’t tell the truth) is that human-induced climate breakdown, mainly due to C02 emissions, is fast bringing the planet to the point of uninhabitability. And I mean fast. This is no conspiracy theory.

The conservative Intergovernmental Panel on Climate Change (IPCC) in autumn of 2018 gave us 12 years to radically change our civilisation or pay the consequences of widespread war, plague and famine this century, including in the UK. Other scholars think that civilisation could collapse in under ten years. For more information watch our talk ‘Heading For Extinction and What To Do About It’.

What exactly is XR attempting to do?

XR’s response to the global emergency is to make these demands of our government. The demands have been adapted internationally:

To pressure the Government to respond to our demands, XR engages in escalating acts of NVDA and mass civil disobedience. Our biggest event so far is the now infamous bridge-blocking event in London, November 2018 where we blocked five bridges and brought the city to gridlock for a day. There were 85 arrests.

Based on the research of scholars like Erica Chenoweth, deliberately acting to bring about mass arrests and even imprisonments, if done non-violently and with enough co-operation of the media, can bring about transformational social and political change. 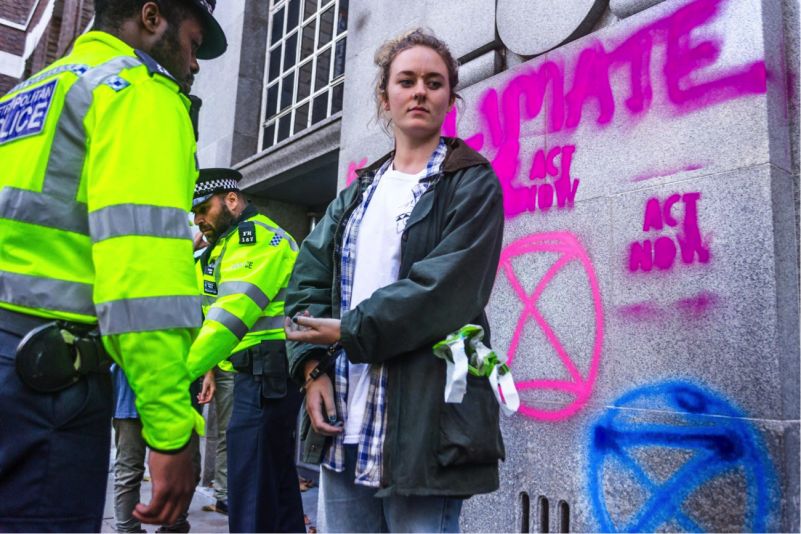 Additionally, XR is guided by the following principles and values:

Since October 2018 we have made significant gains in terms of gathering support and momentum. In December 2018 an open letter was sent to The Guardian in support of XR, signed by 100 prominent global academics and public figures including Vandana Shiva, Naomi Klein and Noam Chomsky.

One of the most surprising and incredible things about Extinction Rebellion is how family-friendly our actions are. The festive, non-violent atmosphere at our events means that even young children feel at home – with toddlers clapping alongside the adults as activists are taken away by the police. We practice the greatest discipline at all times. 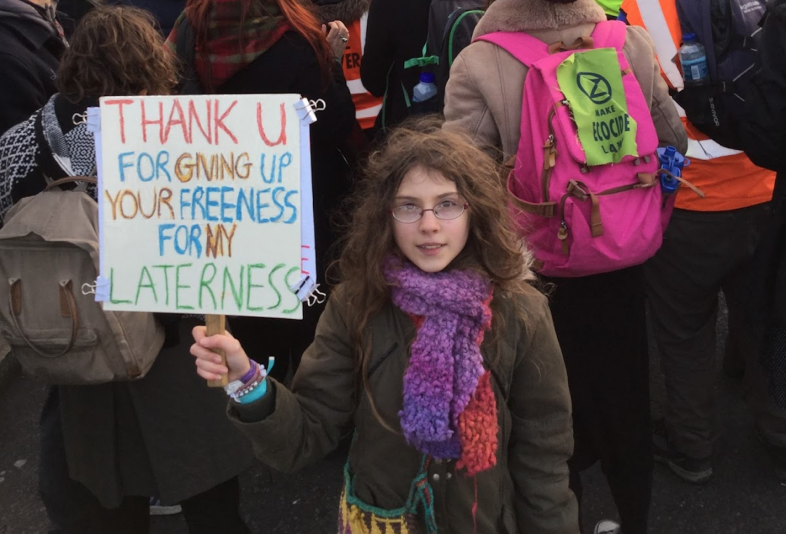 Many of us are willing to lose our liberty for this cause, even if for just a few nights in a police station. We hope that you will join us. We are empowered. We are taking responsibility. And we are partying while we do it.

We understand that not everyone is able to put themselves up for arrest. Rebelling with XR can take many different forms, so if you’re unable to risk dealings with the police there are still plenty of ways to join the fight.

We are currently escalating to International Rebellion Day on 15th April. This is the biggest event yet in the Extinction Rebellion calendar and a potentially pivotal point in human history.

We will be making non-violent mischief in central London for at least a couple of weeks, aiming to culminate in so many arrests and contempts of court that the Government is compelled to give in to our demands. If we don’t manage it, it doesn’t matter, we’ll soon be back. We are getting stronger all the time. Don’t miss out on the chance to be involved.

Not everyone is expected to get arrested (although the more the merrier). You can just come and be with us. Or join one of our many support roles in the Media, Arts, and Regenerative Culture (including Action Well-Being) teams, to name just a few (more on that HERE). I am personally a part of the national Regenerative Culture core group, and I can tell you I feel honoured to join with such wonderful human beings, working on making XR as caring, as nature-connected and as nourishing a movement as possible in this time of crisis.

I invite you to get involved! We have donation-based NVDA trainings, legal trainings, Regenerative Culture trainings and others that you can join. Visit the main website for more details. There will also be XR folk marching on London from around the country from mid-March, and our Rebel Riders groups will be cycling to the capital. Everyone will arrive for the 15th. The only sustainable self-and-nature-powered mode of transport we haven’t yet covered is boats. Any ideas?

“IF I CAN’T DANCE TO IT, IT’S NOT MY REVOLUTION” – Emma Goldman 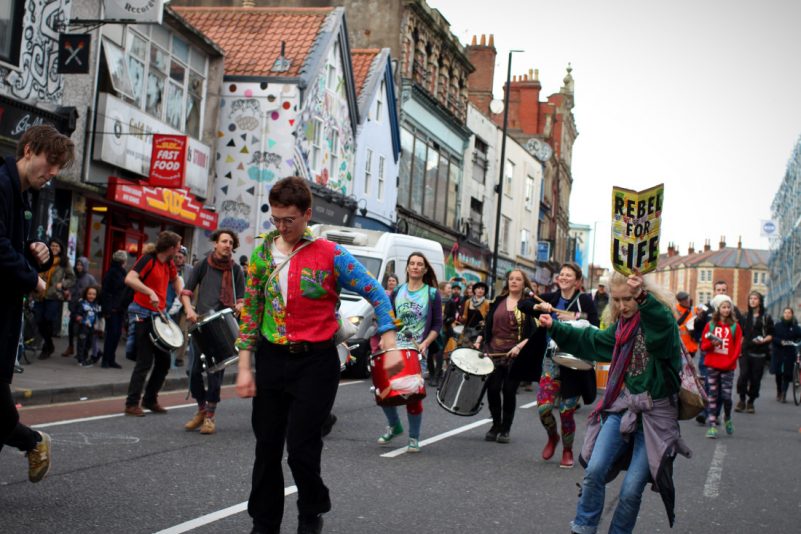 Despite the predictions of imminent climate catastrophe that most politicians and the mainstream media are just not admitting, despite the fact that we are hurtling towards extinction, the party will not stop so easily! To be human is to play! We cannot, we will not, stop dancing, or for that matter singing, creating, play-acting, making theatre, and all the other wonderful parts of being human.

So much of XR’s actions involve theatre, music and dancing. All of the actions involve artwork. Us humans cannot help ourselves from having fun. But considering the existential threat posed by climate breakdown it is our moral duty to have fun in the streets in a non-violent civilly disobedient way. A way which challenges the law-makers of this land.

Shambalans, I ask you, what politics are you involved in? What activism? Because if you’re not doing politics, politics is doing you (over). Big time.

Could XR be your way into a more politically engaged and whole life? Isn’t it time for Shambala to spill over into the streets? I know you are ecologically conscious. I know you find it hard to deal with how fucked the world is sometimes. So do I. We don’t like to face our own demise.

I’m getting serious right here. It’s time we got arrested for singing in the road, making theatre so good it’s dangerous, plastering our law-makers’ buildings with posters, and dancing. Dancing hard and dancing now, as if our lives depended on it – because they do.

I urge you to admit the truth of what is going on with the breakdown of global ecology. Admit the truth of the inaction of governments globally. Stand firm in that knowledge. Drop your centre of gravity a little. Close your eyes. Walk out. Stop the traffic. And start having the time of your life.