This blog was kindly written by Ed Gillespie, co-founder of sustainability comms agency Futerra, and all round Shambala legend. You can read the original post here.

Ah, Shambala. One of the UK’s most wonderful festivals, a self-declared purposefully hedonistic adventure into experimental Utopias. It’s been mine and Futerra’s privilege to be actively involved in helping curate venues there over the last six or seven years and this year we ran the talks and workshops in new tent ‘The Garden O’Feeden’. As part of Shambala’s bold ‘meat and fish-free’ experiment, we were exploring themes around ‘Food for the belly, food for thought and food for the soul’and were blessed with the generous and talented contributions of a number of awesome people. I was going to pick out highlights, but that seemed inadequate as the whole suite of talks was infinitely greater than the sum of the parts, so instead here’s an overview of the whole programme – a one-stop-shop for the combined brilliance of so many people challenging the perceptions of what might be possible tomorrow, today.

We kicked off on Friday with Charlotte and Bart from Sutton Community Farm outlining a heroes journey of seasonality and how just 400 local veg box customers can help change the way we eat seasonal produce. Which included a rather erotic Tromboncino squash and the unorthodox use of a swede as what can only be described as a ‘ball-gag’. Alice from Bristol Fish Project and Claire from London’s Grow Up then took us through the joys of emerging urban aqua and hydroponics, from hi-tech sophistication to lo-fi post-apolocalyptic survivalist-style steampunk improvisation. Carolin and Annie from the Food Assembly (called ‘Say yes to the beehive’ in it’s original French incarnation) inspired us around how tech can connect producers and consumers. Sarah Mace shared amazing, humbling insights from the front-line of food distribution in humanitarian aid relief efforts, and the gang from Chipper, Dan, Lea and Emmanuelle talked us through the nutritional and sustainability benefits of eating crickets – the meal that can lift thirty times it’s own body weight! These invertebrate delights also being creatively cooked up by my very own brother Will and his friend superstar chef James Knight outside the Garden O’Feeden in the Insect Bar – Anyone for crickets? – the only (non-dairy) animal protein being (overtly!) sold on-site. 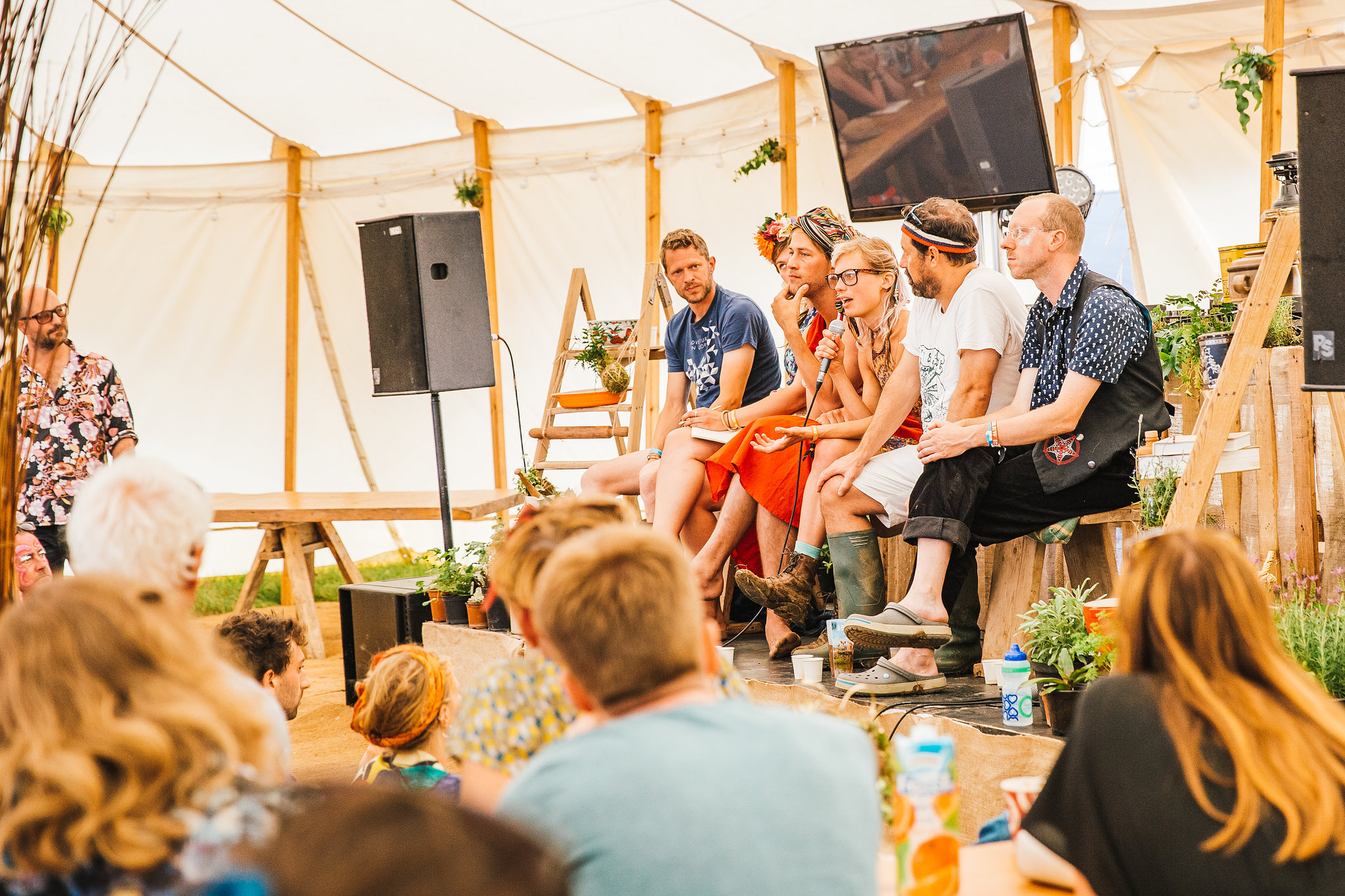 The day wound up with Latitudinal cuisine’s Alex Haw and food waste aficionado Feedback’s Tristram Stuart leading us in an orgiastic Bonobo-style sharing feast using gleaned produce from the inimitable Elsie’s Café in Northampton. Watching as a crowd of hungry revellers eagerly fed each other (the rules were you weren’t allowed to feed yourself…and then you weren’t allowed to use your hands – check out the pictures here!) was a sight to behold!

Saturday started with my other brother (it was a family affair), permaculture gardener George, talking about whether if plant’s have feelings too (inspired by the work of Sir Jagadish Chandra Bose and his crescograph) should we be eating them? Richard from Growing Underground explained how he came to be running a renewable energy-powered, LED-lit, hydroponic farm in a disused tunnel 30m under Clapham High Street and ‘inspiration engineer’ Chris Paradox’s ‘Soul Food Gardening’ examined how we nourish our own sense of purpose and spirit to discover our ‘Ikigai’. Cultural anthropologist, global traveller and relatively recent vegan-convert Geoff DeVito challenged us all around the links between diet and identity, the avoidance of ethical judgements, the use of the ‘V’ word, and why veganism (oops, I used it) is like LSD – helping you to see the world of food in entirely new and revelatory ways (and meaning you’ll never see anything in quite the same way again). Om Bar’s Richard roved through the ethnic, cultural and nutritional history and benefits of raw chocolate – rediscovered. And gave us lots of free samples, a gift always likely to please an audience.

New diets perhaps mean the need for new rituals of meaning around meal-times, for example what replaces a bacon-wrapped turkey at Christmas? And what might be the new frame around a meat-free version? Celebrant Tiu de Haan guided us expertly through what that could look like and completing a fantastic second day maestro Chef Oliver Rowe cooked up a literal storm to feed the gathered crowd some contemporary culinary delights from his new book ‘Food for all seasons’.

How could we top all this on Sunday? Well we gave it a good try! Mikey and the gang from Shambala regulars Sunday Assemblyconvened a typically celebratory and raucous dance and singalong, we ate raisins mindfully and I gave a guest sermon based on my TEDx talk ‘We literally are what we eat’. Then Adam and Elina from Mamaby discussed their work to unite people and cultures globally through delicious snacks that change the world and encouraged us all to ‘eat for change’, before Nessie Reid brought her ‘Milking Parlour’ insights to the gang around ethical dairy farming, having spent a week living with cows. The brilliantly named (and lovely bloke) Robert Savage Onstwedder was at the same time making a batch of his equally brilliantly named festival-hit ‘Shalloumi’ cheese from scratch outside the venue (it actually came out as Ricotta. But we’ll forgive him that, it was still delicious!). Andres Roberts shared his work on leading vision quests and pondered on whether getting naked in nature can help radically shift our perspectives. It seemed to work. At least one audience member was actually nude! Wrapping up proceedings was the BBC’s Fredi Devas talking about the tricky challenges of sustainable alternatives for Bushmeat foraging in west Africa, and the wonderful duo, Ilana and Michael from food waste ‘snactivists’ Snact shared their story and their tasty fruit jerky.

We were also serenaded of an evening by the gorgeous musical talents of Neeta Sarl, Boe Huntress and Liz Williams, as if the intellectual stimulation wasn’t enough? Perhaps the highlight of the whole weekend however was ‘The Great Shambala Food Debate’where a packed tent and brilliant panel romped through the big questions raised over the weekend by the festival. The conclusion? Going 100% ‘V’ may not necessarily be the simple answer, especially given the benefits of a low-meat and dairy diet within a localised permaculture system of agriculture. And that Shambala’s role is to provoke precisely these sort of discussions. One of the festival’s co-founders Chris even suggested a radical return to meat in 2017 – perhaps only selling offal?! 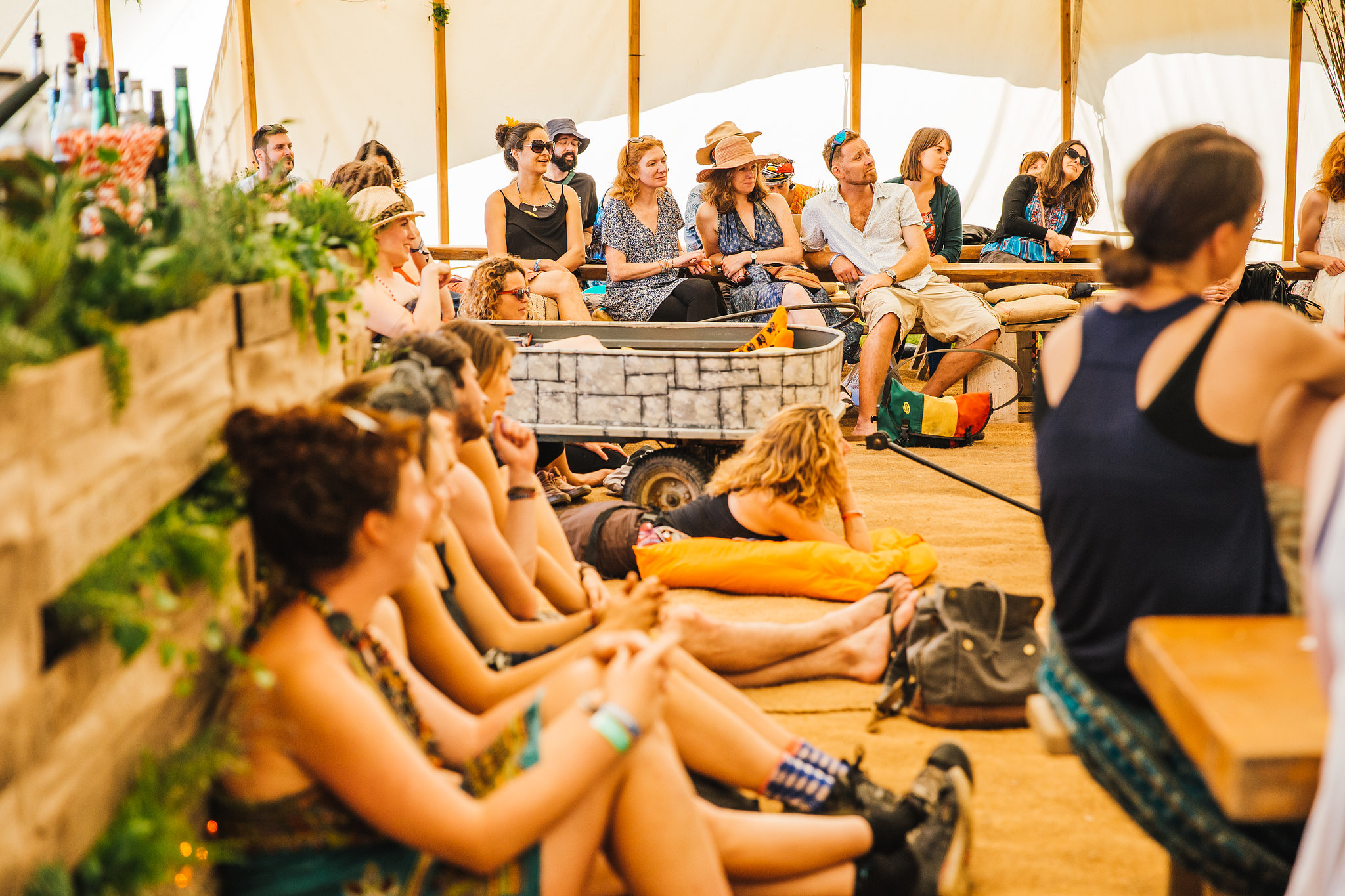 It was an exhilarating and exhausting weekend of big ideas, big thinking, big questions, and an absolute joy to organise in what was widely praised as one of the festival’s most beautiful venues – artfully orchestrated by the lovely Gemma Thorogood and her team. Ultimately the shared theme of such an incredible range of perspectives was that our food system is ripe for disruptive innovation towards sustainability, that we are all actually environmental activists three times a day, where every mouthful we eat matters and shapes our world around us. As I said in my TEDx, we either eat for our collective future, or we simply eat our future. Please use the power of your appetites wisely!

See you in the field of new possibilities again in 2017.