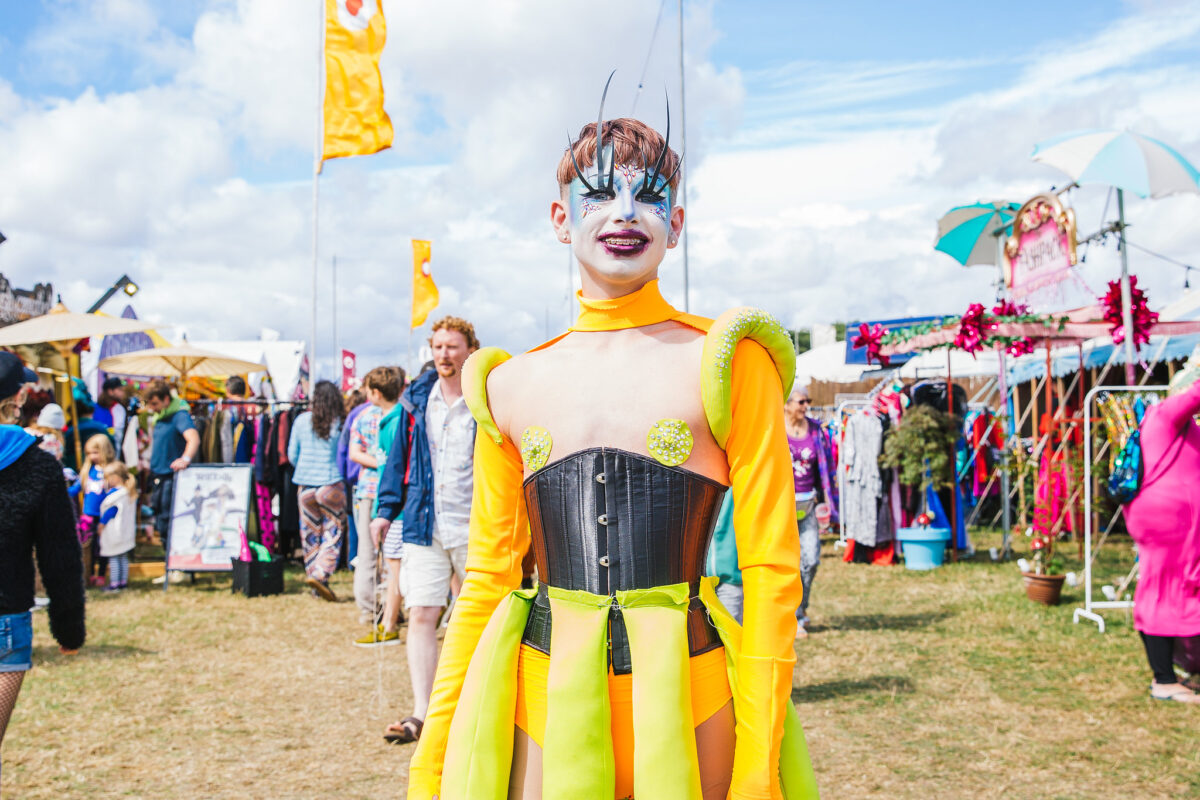 Who doesn’t love a make over? Back in 2018, we figured it was about time Fruity Friday slapped a little proverbial lippy on. New and improved, we want Shambala’s Friday to be more than just a titillating play at ‘cross-dressing’: the gender binary’s dead now anyways! We want Friday to be the time when people have free reign to experiment with their gender expression – to be bold and open, in safe and silly, Shambolic surrounds!

“Fruity,” the delicious cocktail of sweet sweet plant matter, can also have pretty damning connotations. In Britain, the word has historically meant naughty, bawdy and spicy (no bad thing there!), but has also been substitute for notions of the wicked, impure and rotten. In the US “fruity” has subsequently been used as a homophobic slur. This etymology lesson has left us with a sour taste in our mouths… we figured it was time to do away with fruity. Time to make Friday as inclusive as possible.

So, FREEDOM FRIDAY was born– a day for ludicrous, lovely, larger-than-life gender play; a chance for people to experiment; to dress their truest or to put a ginger foot forward out on the slippery slopes of gender spectrum; to play pretend; to proclaim “IT’S ME”; to revel in body positivity. We hope you’ll get stuck in and embrace the name change. This is an invitation to up-the-ante, covered up, stripped down or dressed to the nines – and celebrate freedom.

A lesson from herstory.

Developing our Friday forays in dress-up has been a really important aspect of making Shambala as welcoming as possible to everybody. In choosing FREEDOM over fruity, we’re acknowledging the joy that political art forms such as drag – from which our Friday’s have borrowed – can bring. Drag, and gender dress up, is a way for folks from all genders to play with what gender can mean, mock the stereotypes we’re all lumbered with and have a party doing it! From drag we can learn the lesson that our bodies are creative, rebellious and political! We want to empower Shambalans to think about what freedom is to them, how they might dress in a freer world while being considerate of difference (cultural or otherwise), and have fun! No judgements, only unabashed, unconditional support and compliments yelled from across a field!

The SanQtuary is a Queer clubhouse run by and for the LGBTQ+ community and our allies. They are intersectional, intergenerational and inspired by the ancestors. The Sanqtuary provides a platform for Queer people to showcase their creativity, learn, celebrate and connect. They offer a space to imagine and explore visions of Queertopia: new possibilities for community building, holistic healing and a world in which Queer folks can thrive. There is a particular commitment from the venue to honour the often unacknowledged contributions of queer people of colour (QTIPOC) to queer, gay and lesbian history and culture – from downtown disco dancers to the afrofuturists, the voguers on the ball circuit, the James Baldwins and Audre Lordes and the Marsha P Johnsons.

Read our Adventures In Utopia Q&A with Camille, curator of the venue.