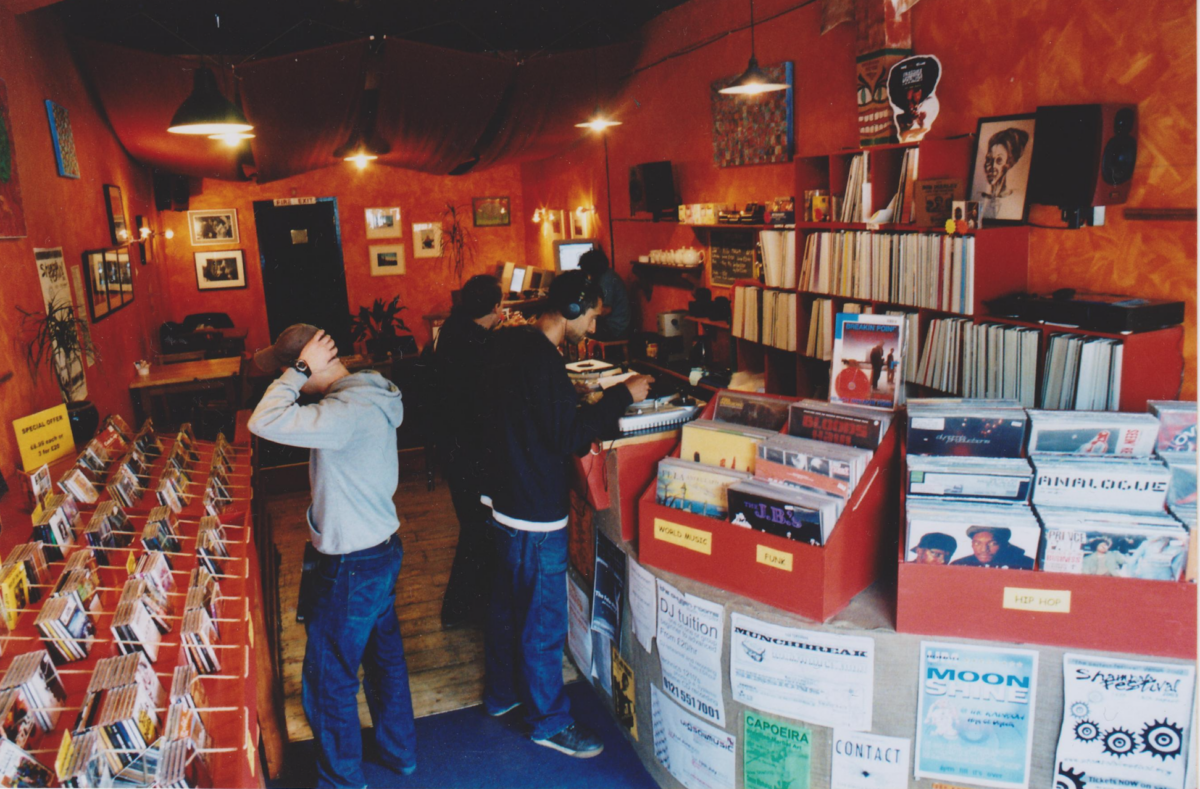 In the late nineties, a group of students met and bonded over a shared love of music, good times and a thirst for questioning the world. We threw a lot of huge, occasionally out of control house parties, disappeared into the Welsh hills with sound systems and put on various nights to support charitable causes.

The first ‘proper’ event we worked on together, Afrika Jam, was a regular live African night in Birmingham Students Union, which we took on national tour in support of People & Planet. Those were the days of cramming into battered transit vans with loads of kit, sleeping bags and a bottle of whiskey. Some good gigs, some bad ones, but a whole heap of fun regardless.

Facing the unappealing prospect of employment after University, we opened our very own record shop, Jibbering Records. Jibbering was part vinyl treasure trove, part community centre, art gallery and internet café. It was our window to the world and a hub for all our various activities (including the HQ of our failed organic veg box scheme – turns out we were way ahead of our time on that one. Rotting veg and records don’t mix anyway.)

For several years in the early noughties, our community of a few hundred like-minded souls, many from Birmingham, Bristol, Sheffield and Cornwall, decamped into a field for a summer shindig. It all started with a couple of loos and farmer’s trailer for a stage. There was no real plan for the future, but we were having a thoroughly good time, so we did it again, and again, and again…

For many years, we ran Shambala around day jobs of carpet-fitting, restaurant and youth work. The early days of handmade clay pendants in the place of wristbands may be a distant memory, but the soul of Shambala has not changed a jot since it began – though we’re grateful to no longer have to walk miles to the dial up internet of the local library to send our emails.

We’re all united in believing that a proper party should not come at the expense of a positive future. We’ve been able to live our values through Shambala, and harness the opportunity to celebrate life and inspire change.

Shambala is still completely owned by the same five friends who began on this unexpected journey. Shambala isn’t a product or a brand. It’s got a life of its own, Its a community of thousands, coming together to share ideas, dance until dawn, revel in all the very best parts of being human, and make a contribution to life in whatever way we can.

WHAT’S IN A NAME?

The name ‘Shambala’ found us.

The very first gathering was ‘Ellastock’, after Ella, whose family owned the field in Devon that we were using. Next stop was ‘Shingay-La’, a twist on the (fantastic) name of the Cambridgeshire village where it was held; ‘Shingay-cum-Wendy’. We then ended up in Devon’s Quantoc Hills, and needed a new name. A few of us had spent time in Africa, and were familiar with the Swahili word for field ‘Shamba’. So we just stuck a ‘La’ on to honour the previous name – voila!

It was only a few weeks before the gates to the first ever ‘Shambala’ opened that we heard about the Tibetan meaning. According to legend, it is either a land or state of being, where only the enlightened or pure of heart can live, a place where love and wisdom reigns. More ambitious perhaps than we intended at that point in time, but not too far from our commitment to do things right.

We’ve learnt a lot. Notably that causing an accidental 6 hour traffic jam in Cornwall can actually land you in prison, and that children can be trusted to play on treetop monkey nets, but grown ups can’t.

In 2005, thousands more people rocked up than we had capacity for, jumped the fences and things got rather interesting. We were given our marching orders by the county council, and took the following year off to get our sh*t together before restarting in 2007, with lessons learnt.

WHAT WE CAN PROMISE: