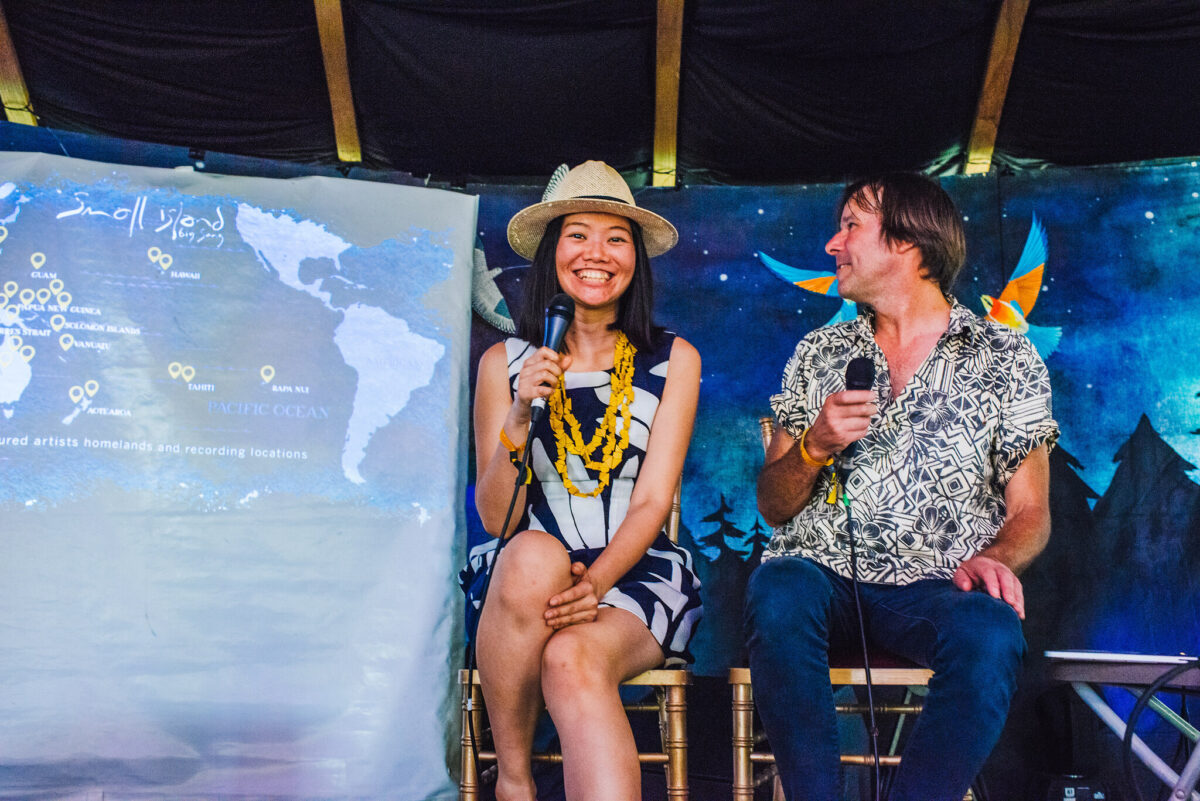 We’ll be releasing a brand new podcast season soon, bringing you a selection of the finest of wise words, revolutionary ideas and beautiful stories, on topics like karma, love, death, epiphanies, activism and psychedelics – all recorded on site under the canopies of the Shambala festival.

Subscribe on iTunes, Spotify, Stitcher or Tune In (or listen on this page).

The Shambala Speaks podcast is lovingly produced by Melissa Kidd and Events in Sound. If you like what you hear, leave us a review on your podcast platform of choice.

Episode 8: Extinction Rebellion’s Gail Bradbrook. We kick off the second season of the Shambala Speaks podcast with the inaugural Shambala sermon. As another mass civil disobedience begins this week, Dr Gail Bradbrook, one of the co founders of Extinction Rebellion shares some timely insights to help us rebel. This episode does contain strong language and may not be suitable for all audiences.

Episode 9: Feeding Ourselves Beyond Brexit. There are many aspects of our lives that are hard to imagine beyond Brexit. And in this fascinating episode Humphrey Lloyd, of the Landworkers’ Alliance, walks us through the opportunities, threats and options that this change could present for our food system.

Episode 10: Cider Battle. Two counties, two rich traditions, two advocates. In this episode we learn from two cider experts Dan Heath and Gabe Cook about our national liquid gold while they try to convince a Shambala audience to decide which county makes the best cider: Somerset or Herefordshire?

Episode 11: Love, Life, Death: and the colours inbetween. In this episode we hear some of the wonderfully rich short poems that were voiced in this year’s poetry slam – sit back and enjoy musings on love, life, death and the wonderful bits in between. Thanks to Shaun Hill, Ali P, Vicki MacWinyers aka Pixievic, Kat from Bristol, Jenny (moon Twiglet), Granma Rapster, Georgia L Stride and GPS.

Episode 12: Food For Thought. In this episode we dip into the Garden o’ Feeden to hear Lauren Lovatt tell us about the tragic events that lead her on a journey of discovery into how food can help our mental health. We also get a couple of her special recipes that combine chocolate with medicinal mushrooms, and Kale with CBD oil.

Episode 13: The Children’s Fire. One of the guiding principles of Shambala is the Children’s Fire. Mac Macartney tells us about the wisdom imparted to him from Native American elders and how this simple principle could help us repair, protect and better care for the world we have inherited and we’ll leave behind.

Episode 14: Homelands & Hinterlands: A slice of Luke Wright. In this episode Comic poet Luke Wright pulls us through his homelands and gives us an idea why we need to see beasts in the shadows. This is a little slice of Luke’s hour-long rollercoaster set delivered to a packed crowd in the Imaginarium.

Episode 15: Psychedelics & The Climate Crisis. In this episode we hear Dr Gail Bradbrook of XR and Stephen Reid of The psychedelic Society talk about their own mind-expanding experiences, how psychedelics have been useful in their lives and how they could be used as a tool in addressing the climate crisis.

Episode One: Adventures in Dystopia: Documentary film maker James Jones takes us on a 15 minute audio-journey through his travels to North Korea, the Ukraine, Saudi Arabia and inside The Phillipines’ ongoing drugs war – all places where a fear of ‘the other’ has been used to incite hate. A sombre start, but if we’re to build utopia, it’s helpful to understand what dystopia looks like.

Episode Two: ‘The Year of Psychedelics’. 2018 is the year that psychedelics went mainstream, yet our native ‘magic’ mushrooms are steeped in mystery. Dr. Andy Letcher takes us on an audio journey that ends with some pretty interesting ideas on how psychedelics could guide us out of the global climate crisis.

Episode Three: ‘The Founder of Carbon Neutral’. Who knew that the history of carbon offsetting was so rock and roll? In Episode 3, Dan Morrell, the founder of Carbon Neutral tells his story – from a wild night out with Jimmy Page and Robert Plant to a terrifying car accident, a near death experience and a talking healing tree. Throw in Joe Strummer, Damien Hirst and a little pet shop in Castle Cary and you have one helluva tale. Buckle up!

Episode Four: ‘GRRRL: Not Your Average Girl Band’. Shambala favourites, GRRRL are a revolutionary group of women musicians from marginalised communities around the world, brought together by the project ‘In Place of War‘. Their incredible performances tell stories of life, conflict, inequality and change. Back at Shambala 2018 we ducked into Rebel Soul – our on-site hub of grass roots activism to catch up with GRRRL to talk about music as activism, bringing sound systems to the favalas – and how, in places of conflict, sometimes all you have is music.

Episode 5: ‘Epiphanies – A Doctor’s Job’: Listen to Dr. Stephen Fabes’ whistle stop epiphany. Taking a trip through A&E via veggies in orifices, to a San Fran party gone terribly wrong, Fabes gives us an insight into how we engage with trauma.

BONUS episode: ‘The Trial of Daisy The Cow’: In this very special bonus episode, we take you inside the Trial of Daisy The Cow, on site at Shambala 2018. The initial Trial of Daisy The Cow took place in 2017, in Shambala’s Garden O’Feeden venue, where Daisy (representing the global livestock industry) was put on trial for crimes against the earth. Daisy was found guilty, but launched an appeal. Delve into this courtroom drama to hear from experts, scientists and even hedgehogs – to explore how what we eat literally shapes the world around us, and find out if Daisy will be found innocent or guilty…

Episode 6: ‘Karma, Love & Death’: In this second part of our epiphanies stories Kash Raja tells us a story about his beautiful relationship with his grandmother. A split second misjudgement leads to his grandmother having an accident he feels responsible for. His fear of karmic retribution in the aftermath leads him to avoid driving and air travel – until he has an epiphany at her bedside…

This story was recorded live at Natural Born Storytellers, in the Imaginarium at Shambala 2018 – if you liked this story, check out their amazing podcast where you can listen to loads more. Highly recommended listening.

Episode 7: Newport Free Festival: Putting a free festival on can expose communities that other wise have a limited access to new and exciting music and culture, but putting one on, especially a free one is never easy as Jools Constant tells us in this story about the fight for Newport Festival.