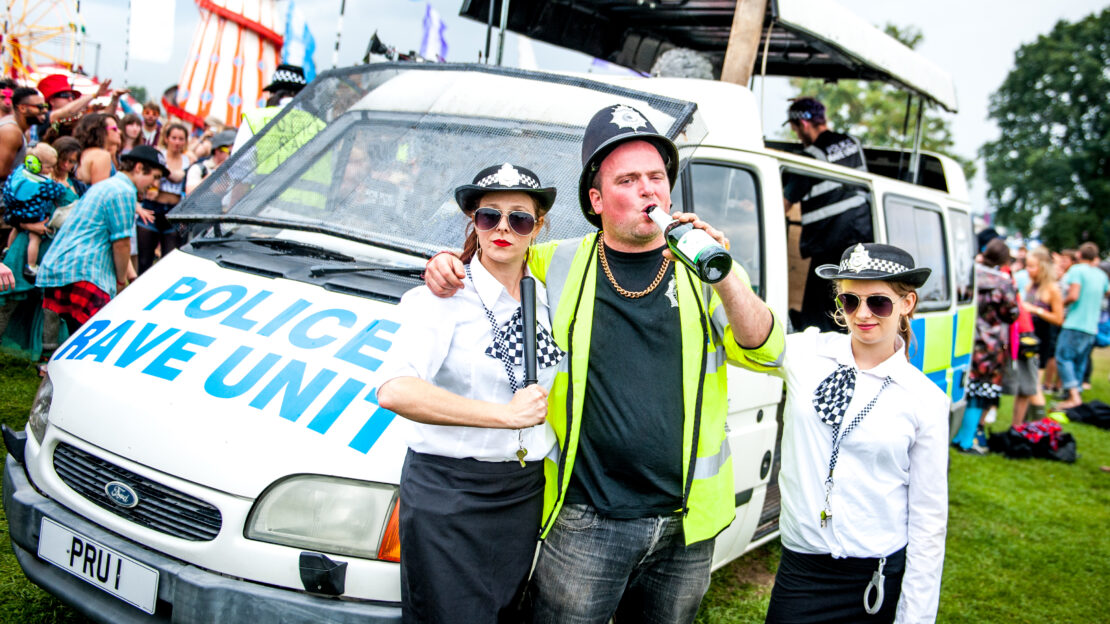 In 2010, some mates put on a late night venue at Shambala, called the Dive/Bling Bar. It was run by and frequented by Travellers and soundsystem ravers. It contained us and our mates safely away from the rest of the Shambala crowd who were maybe a bit nicer (it would get rowdy!).

Later, round the fire, this idea of containment was discussed and the idea of a riot themed venue was born. It was going to have a burnt out car and a ‘kettle’ once on the hour, but after careful reflection the venue was named “The Kettle (of Love)” – to fit in with Shambala’s vibe. In the yard where we lived was a scrap transit with no engine. We decided to turn it into a police van with a seating area. The concept developed so at the end of the night, coppers could jump out the back of it with speakers and have a rave.

The Police Rave Unit was born.

That year at the Kettle (of Love), George Smerin and I donned police garb for the first ever PRU show, consisting of George playing jungle off his iPad and me shouting police stuff down a mic. It seemed to work but it was 4am so the crowd was probably too out of it to notice…

The next year, we decided to get an engine to drop into the transit, before eventually realising it might be easier to put Police stickers on a new van (this kind of dynamic thinking was to shape much of the next 10 years). With hastily borrowed funds (cheers De Gray), we convinced our mates to do the metal work (thanks Hinch & Andy), purchased 6 NATO tank batteries from Arcadia, acquired the first ever doppler system (thanks Dave & Tapey), ensembled a uniform (thanks Rada) and somehow convinced festivals to book us. We got a proper logo made (thanks Georgina) with inspiration from our friend Buzz (old school).

Our first ‘mobile’ appearance was at The Rare One in Wales. We drove across the field with the sirens going and the roof down. People thought it was as an actual raid and responded accordingly…. there were a lot of people really needing to party when they realised that we were the rave police.

George captured it on video – a couple of weeks later ‘Judge’ John Hendicott edited it to a bro step version of The Bill’s theme tune. We put it on youtube to make our mates laugh. 24 hours later we’d gone viral. There was talk of us going on the Radio 1 Breakfast Show, and for 2 weeks we (I) thought we were the absolute shit. When we (I) had calmed down we realised we’d missed the moment to make a fortune from merch (an ongoing theme throughout the years).

Since then, we’ve played all over the UK, from the Isle Of Wight to the West Coast of Scotland, but our spiritual home has always been Shambala. There are so many memories in these fields, from the rave we did between two lorries to repeatedly raving the craft area (where my friend held up a sign saying – ‘I’m sorry I said you had no talent’).

So – why the death of the Police Rave Unit? Two reasons: Politics and Evolution.

The PRU was born from a group of people who put on raves. Other than being funny, it was a satirical comment on the policing of rave culture and an alternative vision of reality where police helped facilitate raves. After 10 years, we’ve made this point pretty well, so probably don’t need to make it anymore. It is also the case that UK policing (whilst always problematic) has gone somewhere altogether darker in the last few years.

The Mutoid Waste Company always challenged people to mutate and survive. We decided that we need to stop dressing like shit strippers and do something else. We thought about what matters to us; the PRU community and the music we play. So the PRU lives on – but as the People’s Rave Unit, which will be launched in 2023….

Thanks to all PRU crew past and present, there are too many to list but you know who you are and we love you.